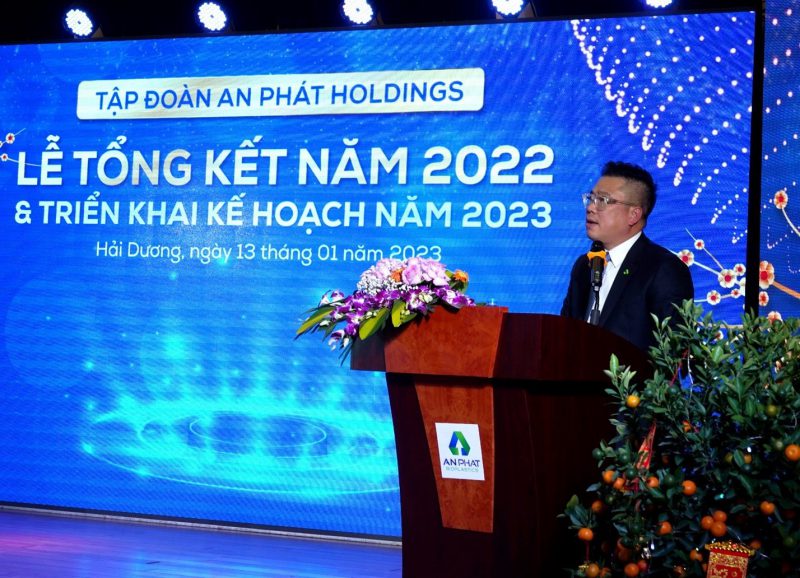 On January 13, An Phat Holdings successfully held the Year-End Ceremony 2022 at An Phat Bioplastics in Hai Duong Province, thereby implementing the plan for 2023. Attending the ceremony were Mr. Pham Anh Duong – Chairman of the Group, representatives of the B.O.D, senior managers of subsidiaries and employees of the Group.

2022 marks the 20th anniversary of the establishment of An Phat Holdings. This is an important milestone in the development journey of the Group. From a small-scale thin monolayer film manufacturer, An Phat Holdings has risen to become the leading corporation in the field of advanced technology and environment-friendly plastic production in Southeast Asia.

In 2022, despite the difficulties in domestic and global economic situation, the industry group including: Packaging; Engineering plastics and Building material plastics; Raw materials and Chemicals for plastic industry; Industrial Real Estate still recorded quite positive results. This is considered as the premise for these industries to accelerate development in 2023.

At the ceremony, the B.O.D also set out new plans and goals for production and business activities in 2023. Accordingly, Industrial Real Estate and Bioplastics segments continue to be top priorities for the Group’s development.

Speaking at the ceremony, Chairman Pham Anh Duong acknowledged and highly appreciated the achievements attaining in 2022. He affirmed that 2022 was a year full of changes and obstacles for businesses around the world. An Phat Holdings is unexceptional. However, with consistent efforts, most of the Group’s business segments have achieved or even exceeded the set plan. This proves that An Phat Holdings has strong resistance to the complicated and unpredictable impacts of the global economy. The Chairman affirmed that this achievement will be a solid steppingstone for An Phat Holdings to thrive in the future.

Entering the new year, Chairman Pham Anh Duong called on all employees of the Group to strive to accomplish the set goals for the next year. 2023 is determined to be another difficult year due to the global impacts. Hence, the Chairman reminded the whole Group to always be ready and flexibly respond to challenges as well as seize the opportunity.

Acknowledging and appreciating the efforts of subsidiaries in 2022, at the ceremony, representatives of the Group’s B.O.D awarded prizes to 4 company members that have successfully accomplished the 2022 plan, including An Phat Bioplastics JSC, Hanoi Plastics JSC, An Cuong Hi-tech Building Materials JSC and An Trung Industries Co., Ltd.

The year-end ceremony was also a meaningful occasion to honor An Phat People who dedicatedly contributed to the development of An Phat Holdings over the years. At the event, the B.O.D of An Phat Holdings awarded the An Phat Gold Badge to individuals who have the dedication to work for 10 years. Especially, individuals who have contributed innovative ideas to APH’s production and business activities are also honored in this ceremony.

Some outstanding activities at the ceremony: