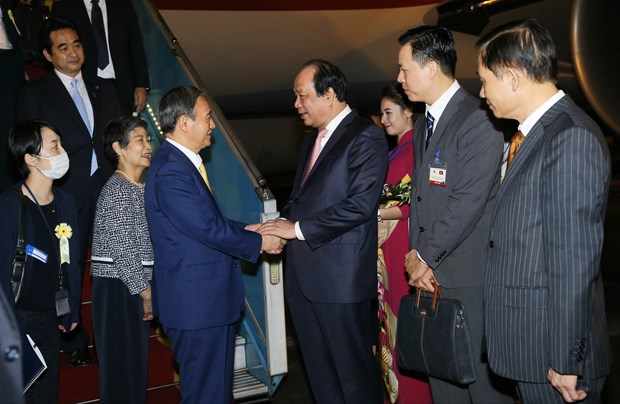 Japanese Prime Minister Yoshihide Suga and his wife started their official visit to Vietnam from October 18 afternoon at the invitation of Prime Minister Nguyen Xuan Phuc.

After Vietnam and Japan established diplomatic ties on September 21, 1973, the bilateral relationship has experienced rapid developments over the past years.

The Vietnam-Japan relationship is now at its best since the establishment of the diplomatic ties, with high mutual trust.

In the first nine months of this year, two-way trade revenue reached 28.6 billion USD. By September 2020, Japan had run 4,595 valid FDI projects worth 59.87 billion USD in Vietnam, ranking second among 136 countries and territories investing in the Southeast Asian nation.

Meanwhile, Japan’s ODA to Vietnam was valued at some 2.57 trillion JPY (23.76 billion USD) as of December 2019, making up 26.3 percent of Vietnam’s accumulative foreign loans.

Notably, collaboration in climate change response has made big strides as Japan has continuously provided ODA for Vietnam in recent years to help the latter roll out projects in this regard.

Partnerships in education and training have also flourished in different forms. Currently, Vietnam is the largest source of trainees in Japan with the total number exceeding 230,000.

Japan is one of the countries that have granted the largest non-refundable aid to Vietnam’s education and training sector. More than 80,000 Vietnamese students are studying in the country.

Japan is cooperating with four Vietnamese universities to improve their training quality, while helping Vietnam with high-quality personnel training in science, technology, management and services, and Japanese language teaching.

Relations between localities of the two countries are also thriving, with more than 70 cooperation documents inked so far.

Amidst the COVID-19 pandemic, the two countries have maintained all-level exchanges in different forms. PM Phuc held phone talks with PM Suga on October 12, and with PM Abe on May 4 and August 4.

The two countries have also supported each other in the fight against the epidemic.

The Japanese leader’s visit would offer an opportunity for Vietnam to prove its safety and effective response to the COVID-19 pandemic, while promoting the country’s achievements in reform and socio-economic development, as well as efforts in improving its position in international area, implementing the foreign policy and international integration.