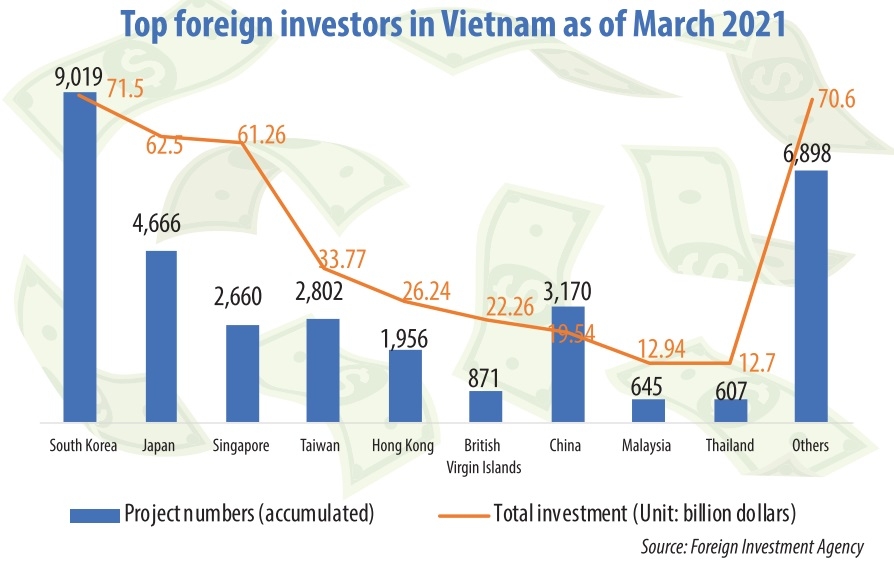 South Korea is expected to keep its top position as Vietnam’s largest foreign investor on the back of upcoming investment inflows going into high-tech production, buoyed by pandemic successes on both sides.

Director general of the Ministry of Planning and Investment’s (MPI) Foreign Investment Agency (FIA) Do Nhat Hoang confirmed that the number of South Korean investors setting eyes on Vietnam has been increasing, even during the pandemic when all trade and investment activities were interrupted.With hundreds of newly-registered and capital expansion projects arriving every year, with around $5-10 billion of the total investment, South Korea was the first of 139 countries and territories investing in Vietnam in March. According to the FIA, there were more than 9,000 valid projects by South Korean investors in Vietnam with the total registered investment of $71.5 billion, ranking first both in registered capital and the number of projects.

“There were twice as many South Korean projects than Japanese investors [ranking second], with $9 billion more in capital. This confirms the determination of South Korean investors, as well as the quality of their investment in Vietnam,” said Hoang.

Last week was the first time the MPI collaborated with the Korea Federation of Small- and Medium-sized Enterprises (KBIZ) to organise an online conference with the participation of hundreds of South Korean businesses from energy, industry, electronics, and services. Of these, investors expressed greatest interest in semiconductor production, with many expressing eagerness to enter Vietnam at the soonest to carry out billion-dollar projects. They said they were impressed with Vietnam as a destination for semiconductor projects, thanks to the affordable investment and skilled human resources.

Investment in semiconductor production has increased significantly in Vietnam thanks to the country’s policies encouraging digital transformation as well as its advantages in exporting – and the interruption of global supply chains. Most recently, AT&S, an Austrian semiconductor manufacturer, began looking for a location to build a factory in Vietnam with a total investment of €1.5 billion ($1.8 billion). At the same time, Intel Products Vietnam, a subsidiary of the US’ Intel Group, received an investment certificate for an additional investment of $475 million to build the most modern facility for testing and assembling chips in Saigon Hi-tech Park (SHTP), raising its total investment to $1.5 billion, according to director general Ingolf Schroeder.

Samsung Electronics Ho Chi Minh City CE Complex has also just been approved to change from a high-tech into an export processing business that can facilitate its supporting businesses, especially semiconductor producers, to gain more added value. Meanwhile, in February, a new semiconductor player from the US, United States Enterprise, has set foot in Danang Hi-Tech Park with a $110-million project.

Highly appreciating the plans of South Korean semiconductor manufacturers, director general Hoang emphasised the special incentives Vietnam is offering in high-tech sectors and semiconductor production. “Numerous giants, especially from South Korea, have been developing research and development centres in Vietnam, which is good condition for semiconductor manufacturers to invest here. We are ready to extend special incentives like corporate income tax under 10 or even 5 per cent for high-tech projects committing to technical transfer. Immigration procedures can also be fast-tracked if investors can provide evidence of their plans or existing projects in the country,” said Hoang.

The Economist Intelligence Unit under The Economist gave Vietnam six points out of 10 for its foreign investment attraction policies, with India and China getting only 5.5 points. Meanwhile, Vietnam scored 7.3 points in controlling foreign trade and exchange, while it was 5.5 points for India and 6.4 for China.

However, despite the favourable conditions here, not all of foreign projects succeed. Talking to VIR, Ko Sang Goo, founder of K&K Global Trading Co., Ltd., the operator of the K-Mart and K-Market chains in Vietnam, discussed challenges of bad timing and poor preparation, bringing up the Korean Town in the VKO building in Hanoi, which it had to close very soon after opening.

Meanwhile, several projects were not developed even a decade after receiving their investment certificates. Specifically, Leeku Vina Co., Ltd., which planned to build a factory producing stainless steel in My Phuoc 3 Industrial Park in the southern province of Binh Duong, has done nothing since receiving approval for its $600,000 investment in 2008. In 2012, the project was transferred to Duck Heung Wire MFG, but there were no developments, excepting for paying around $242,000 rent for the 2008-2012 period.

“Investors, who do not seriously implement their investment projects in the committed schedule will not receive the land use right certificates or any support of local authorities,” Hoang said, adding that these are only singular cases among thousands of South Korean projects that are operating successfully in Vietnam, for both sides’ benefit. “I believe that the quantity and quality of South Korean projects will improve in the time coming and South Korea will remain the leading foreign investor in Vietnam, and even widen the gap with the runners-up,” he said.