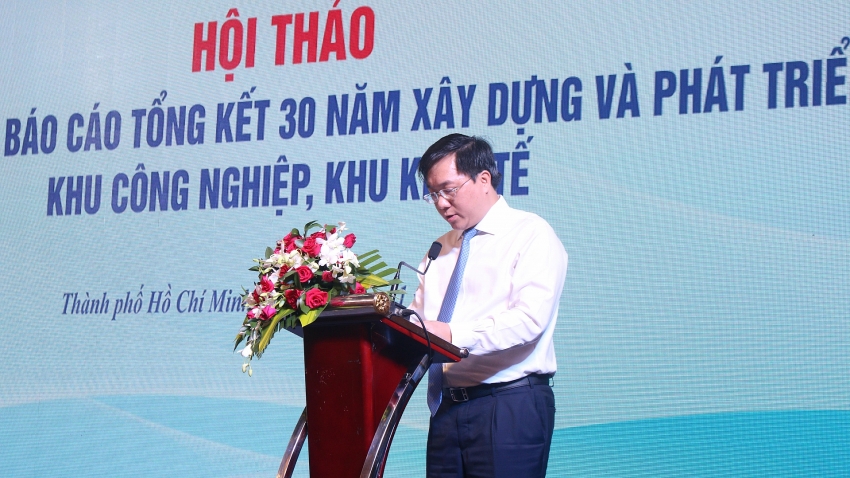 Experts and investors from the workshop to collect opinions on the review report for 30 years of developing and constructing industrial and economic zones held in the morning of November 20 in Ho Chi Minh City have agreed that a separate law is needed to regulate issues to help develop this segment sustainably in the coming time.

According to Tran Duy Dong, Deputy Minister of Planning and Investment, the development of industrial zones (IZs) and economic zones (EZs) has positively contributed to improving the institution and the business investment environment, as well as encouraging the renewal of administrative procedures.

The concentration of many IZs and EZs in one hub or along major national highways has put pressure on the technical and social infrastructure system of the local authorities.

Moreover, IZs and EZs have not been attractive enough for tenants, including with unsynchronised development inside and outside of the zones.

“Vietnam is entering a new phase and it requires comprehensive and strong reforms to become a developed and modern country, overcoming the middle-income trap and avoiding being left behind by other countries in the region. To do this, we have to continuously innovate and improve institutions, policies, and adjust the goals and orientations for the development of IZs and EZs to adapt to the new context, contributing to the implementation of development strategies and the development of the country,” Dong said.

They have also proposed practical and breakthrough solutions to build and develop IZs and EZs in the coming time.

Based on the content of the workshop, the Ministry of Planning and Investment will prepare a draft report on 30 years of construction and development of IZs and Ezs, formulating a law or resolution for submission to the prime minister for consideration.

IZs and EZs have made positive contributions to the growth and development achievements of Vietnam, through the strong attraction of foreign direct investment, adding an important capital source for the total social investment capital.

In 2016-2019, the annual average export value accounts for over 55 per cent of the country’s total export turnover.

Also in this period, EZs and IZs had contributed more than VND400 trillion ($17.3 billion) to the state budget. This accounted for 60 per cent of the total local budgetary revenues of some provinces such as Quang Nam, Quang Ngai, and Haiphong, creating jobs for more than 3.8 million direct workers, accounting for about 7 per cent of the country’s labour force.