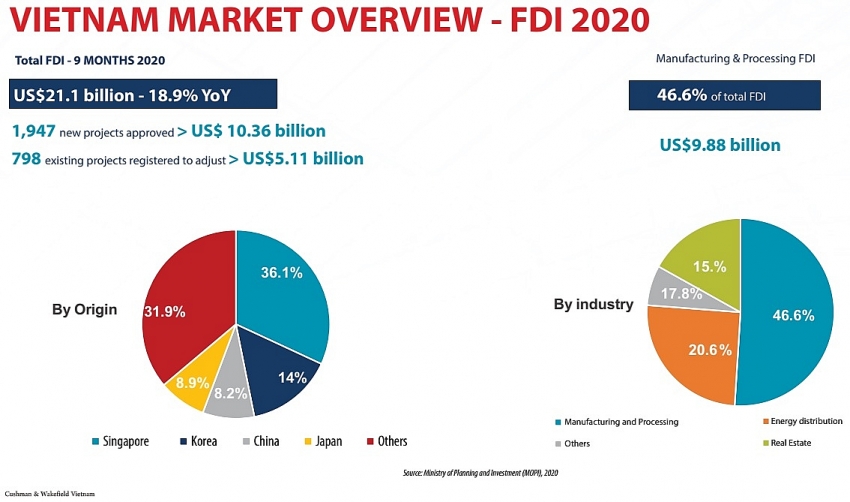 The region’s industrial property market is witnessing one of the hottest periods ever. Paul Tonkes, Cushman & Wakefield’s director of logistics and industrial services, shares his assessment of the potential and how capital flow will be driven into this area.

Despite the dire situation in central Vietnam that is facing extreme floods, the country is otherwise getting full marks for its overall performance amid the pandemic and is poised to be the new de facto leader of ASEAN. One reason is because the country reached UN climate change targets, the only nation in ASEAN to do so, and even outrunning most European nations. In addition to managing the impact of the pandemic on people and the economy extremely well, there has also been the signing a new free trade agreement with the EU (EVFTA).

In addition, production capacity slowed down in late 2019, which had an influence on factory expansions and local management. Since the beginning of the pandemic, experts could only remotely work with plants in Vietnam and although this led to some quality loss in the short term, the PMI surged back to 52.2 in September, reflecting the first growth of the sector in three months and the fastest pace since July 2019.Looking at the market this year, $21.2 billion of foreign-direct investment (FDI) in 2,000 new projects were recorded in the first nine months of 2020, down 19 per cent on-year, including a 47-per-cent share in manufacturing and a 15-per-cent share in real estate. Although the Purchasing Managers’ Index (PMI) was bouncing back strong to 51.1 in June, it went back down to 45.7 in August which may be an economic symptom of COVID-19’s continuing impacts across the world.

After the EVFTA was passed, the government stipulated preferential export tariffs and import tariffs levied to implement it. Unfortunately, some Vietnamese producers are still facing problems with complying and fully enjoying the benefits of the agreement.

The new FTA and Vietnam’s economic robustness are demand drivers for frozen food supplies and have put Vietnam in a good position to lead the region as a stable hub for food processing and supply. The timing of the FTA is rather good and although trade has been hampered, the closed borders provide local suppliers with a slight advantage to get ahead. Now more than ever, the focus is on reducing cost.

Cushman & Wakefield’s annual Global Manufacturing Risk Index (MRI) scores each country against 20 variables that make up the three final weighted rankings, covering conditions, cost, and risk. In cost ranking, Vietnam jumped to the second position in 2020 from fourth position last year, with COVID-19 and the US-China trade war acting as two important catalysts to choose Vietnam as an offshore location.

For Vietnam the reshoring trend has not yet had any impact directly, but indirectly as the group of businesses that are moving out of China to choose Vietnam for restoring their operations is larger than the group that remains offshoring.

Reshoring could have a positive effect on Vietnam as it is about shortening supply chains, reducing long lead times, thereby giving manufacturers more control over production quantities and allow for greater flexibility in response to demand. However, this part of the chain is not yet well developed in Vietnam considering the potential and untapped local market in some cases.

Furthermore, automation, robotics, and 3D printing make reshoring a viable solution in terms of cost which was already a concern for manufacturers in response to rising wages in China and other Asian countries. Thus, Vietnam could see a rapid adoption of Industry 4.0 if stimulated by government policies, ecommerce effects, and FTAs.

As we near the end of a historic year, Vietnam continues to go against the grain. While most economies are shrinking according to the Asian Development Bank’s latest forecast, Vietnam’s GDP will grow by around 1.8 per cent in 2020.

In 2021, Vietnam is expected to blaze past Malaysia and Singapore as the fourth-largest economy in ASEAN. Apple supplier Pegatron will invest $1 billion in Deep C Industrial Zone in Haiphong, while logistics park developer LOGOS is launching its $350 million Vietnam venture and secured its first site in Bac Ninh province.

In addition, GLP announced its $1.5 billion joint venture with several logistics parks in the pipeline.

Although several industry park developers have been seeing their net profits and revenues drop up to 50 per cent in the second half of 2020 as global lockdowns directly affected new projects’ leasing land, VSIP Becamex broke ground for their new 1,450-hectare industrial complex on the central coast of Binh Dinh in September – an important milestone for the development of the coastal area and the impetus for the East-West corridor and third port strategy.

Outlook for FDI in manufacturing and industrial real estate in 2021 is bullish, especially with Vietnam ranking second after the United States as the most attractive destination for mergers and acquisitions.

The wave of investment has already started and will ramp up fast as long as Vietnam maintains its cost competitiveness and continues to work on improving conditions and cost and risk for manufacturing. 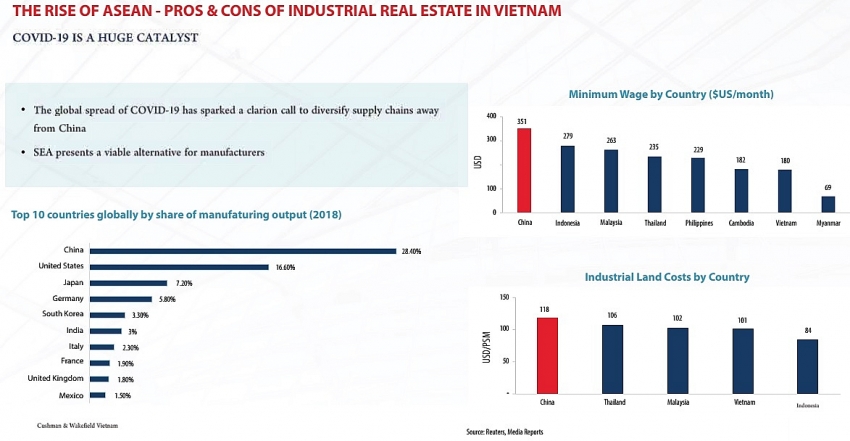 The plethora of webinars recently have proven good opportunities for incoming investors to prepare their projects and collect market insights. Now, these webinars are also turning into more offline events and promoting business missions to Vietnam for the coming year. However, ideally it is necessary to create more solutions to travel back and forth from key trading partners with shorter quarantine and no fixed itineraries, maybe by using the ‘travel bubble’ principle.

Vietnam has already proven itself as a robust and stable base, therefore mitigation risks in the supply chains could be amplified by instability of other regions, to persuade those investors still in doubt. For example, whenever they think about relocating from China to either Thailand or Vietnam, the new unrests in Thailand will be helping Vietnam.

It is most important to continue updating infrastructure planning and building Vietnam up as regional hub with relevant infrastructure and ideally an acceleration of public-private partnership projects after the new law comes into effect next year.

Hopefully, we would see more action in the southern areas to build up new nodes underpinning Vietnam’s hub function both at the new international airport and the deep seaport. In the south, Phuoc An bridge project was approved, funded, and is now starting to link Dong Nai with Ba Ria-Vung Tau. More importantly, the Airports Corporation Vietnam is expected to start with the development of phase one of the 5,000ha large Long Thanh International Airport as the new aviation hub in the region.

Another indicator we are on the lookout for is that for the first time in 18 years, the central government increased financial support for Ho Chi Minh City. The region’s development would drastically lower logistics cost and advance the economy, especially when barging to the hinterland and implementing more multimodal transportation hubs.

Apart from preventing Vietnam from importing energy, the new power development master plan will also be essential to keep Vietnam attractive for FDI. The nation is on the right path with renewable energies as several large power plants using liquefied natural gas were greenlit, including a $5-billion investment from ExxonMobil in Haiphong that will supply 2.25GW to the grid.

Furthermore, the new laws and decrees aiming to remove barriers for real estate development and project licensing, as well as capital investments, land use, and compensation will also help to keep FDI coming and staying.

First and foremost, the supply chain of Vietnam deserves a lot of attention and the supporting industry need to be developed further. The government supports this with the new Resolution No.115/NQ-CP from August 6, promoting a framework that should stimulate the development of the supporting industry and ease dependencies on imports.

Working on the development of supply chains before foreign competitors start rushing back in should hopefully do some good in combination with many other initiatives launched by foreign investors and nations like the US and the EU.

As a result of these efforts, more specialised parks like high tech, science, eco, biotech, and maritime ones are now already emerging.

Investments in agri-tech and logistics by using the Internet of Things and other efficient management systems will, for example, reduce high post-harvest losses, improve quality, and add value, thus creating more potential for the processing sector and demand for research and development.