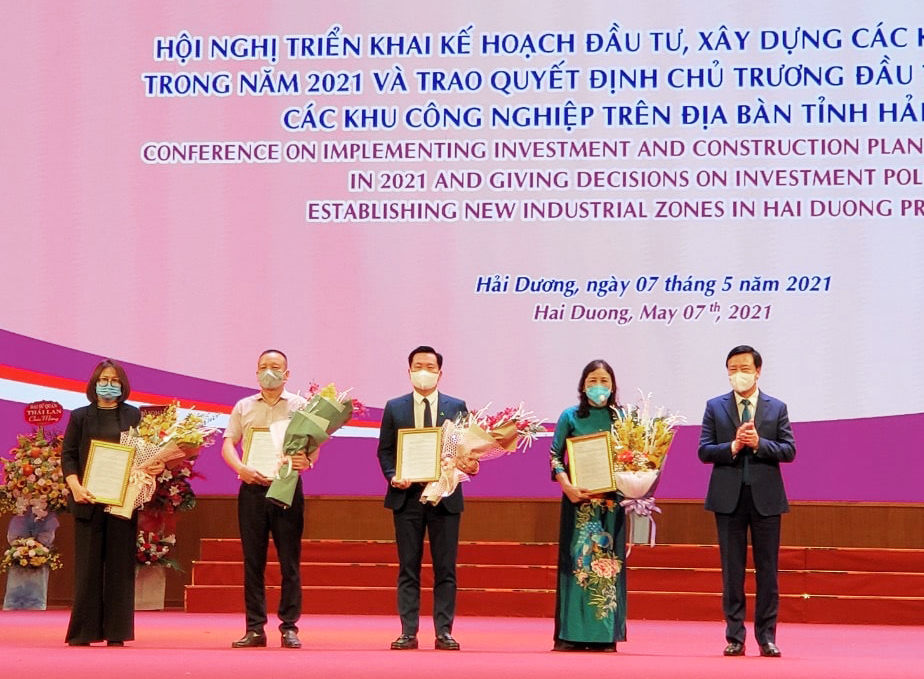 On May 7th, 2021, at the “Conference on Implementing Investment and Construction Plans On Industrial Zones in 2021 and Giving Decisions on Investment Policy, Establishing New Industrial Zones in Hai Duong province”, in front of hundreds of domestic and foreign guests and investors, An Phat High-tech Industrial Park No.1 JSC of An Phat Holdings is the typical representative of industrial real estate investors chosen to share about its development experiences and orientation on industrial real estate development.

On behalf of industrial real estate investors in Hai Duong, Mr. Pham Van Tuan, Acting Deputy CEO of An Phat Holdings, General Director of An Phat High-tech Industrial Park No.1 (An Phat 1) said: “The new industrial parks that are under construction are expected to enhance Hai Duong’s position on the economic map, create jobs for thousands of workers in the province and surrounding areas as well as shift the economic structure towards industrialization and modernization. In the future, we aim to build the ecosystem of the leading green and high-tech industrial park in the North in Hai Duong. Thereby, we hope to make a great contribution to the socio-economic development of Hai Duong”.

Also within the framework of the conference, People’s Committee of Hai Duong Province awarded the Emulation Flag to typical enterprises in industrial zones in the province. In particular, An Phat Bioplastics JSC, a member of An Phat Holdings, was honored to receive the Emulation Flag as a typical enterprise in investment, production and business activities in Nam Dong Industrial Cluster.

Speaking at the event and talking about the potential of industrial zones in Hai Duong, Deputy Minister of Planning and Investment Tran Duy Dong said: “Industrial park projects have created jobs for over 100,000 workers, contributed to state budget over VND 1,700 billion (~$ 72 million). Most of the foreign investment projects in industrial zones in Hai Duong province have large investment capital with an average capital of nearly USD 18 million per project, much higher than the average capital per project in the Red River delta region (USD 5.9 million per project) and the whole country (USD 3.9 million USD per project)”.

Currently, An Phat 1 Industrial Park is in the process of site clearance, preparing for the construction and groundbreaking ceremony in July 2021. With the active support from the provincial government, the site clearance is going smoothly and on schedule. An Phat 1 Industrial Park is expected to go into operation and start commercial exploitation from the fourth quarter of 2021.

It is expected that after going into operation, An Phat 1 Industrial Park will attract 50-70 investors, create jobs for about 12,000 employees, and reach a 100% rental rate by 2024. The goal of the project l is to develop Hai Duong’s leading eco-friendly, high-tech industrial park, gathering investors from many fields such as electronics, food and beverage (F&B), plastics, injection molding, supporting industries, etc.