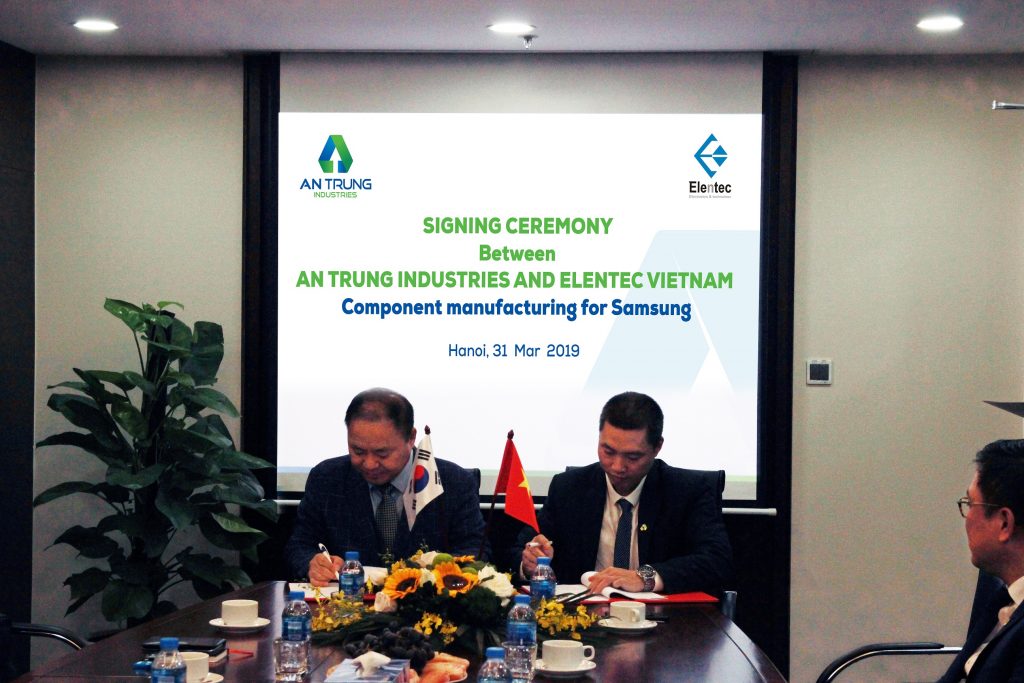 On March 31, An Trung Industries Joint Stock Company, a subsidiary of An Phat Holdings, signed a contract with Elentec Vietnam Co., Ltd. (which is mobile phone plastic component supplier for Samsung) to become the latter’s second-tier vendor.
Becoming a second-tier vendor of Samsung is the sweet fruit of more than one year of non-stop efforts to restructure An Phat Holdings, and will become the basis to realise its ambition to become Southeast Asia’s leading high-tech plastics manufacturer.​

Cho Chang Hyun, general director of Elentec Vietnam, and Man Chi Trung, general director of An Trung Industries,
signed the contract
The sweet fruits of massive efforts
On March 31, An Trung Industries Joint Stock Company, a subsidiary of An Phat Holdings, signed a contract with Elentec Vietnam Co., Ltd. (which is mobile phone plastic component supplier for Samsung) to become the latter’s second-tier vendor.
According to the contract, An Trung Industries has been supplying plastic components for Elentec since March 2019. These components will be installed on Samsung mobile phones, contributing to bringing “Made in Vietnam” products to customers all over the world.
In order to get this achievement, An Trung Industries had to restructure its operations and invest in technology and human resources in order to meet the strict requirements of its partner on quality, price, and timely delivery. The company invested VND400 billion ($17.4 million) to develop a 13,000 square metre plant with 42 manufacturing lines imported from Japan and South Korea.
Man Chi Trung, general director of An Trung Industries, said, “We had to redouble our efforts to become a vendor of Samsung, which is the world’s leading mobile phone manufacturer with very strict quality requirements.”
The result shows that An Trung Industries’ products satisfy the global standards that Samsung issued for its vendors. It also means that the company’s products are of a similar quality to products manufactured in South Korea, Japan, and Europe.

Cho Chang Hyun, general director of Elentec Vietnam, said, “We highly appreciated An Phat Holdings’ investment in An Trung that enabled An Trung to obtain this achievement.”
At present, An Trung Industries is focusing on manufacturing technical plastic components with a capacity of 9 million products per months. Along with Samsung, the company is a partner to 10 other large-scale enterprises operating in the electronics and power sectors.
The company plans to add coating and plating technology lines in order to meet its partners’ requirements.
Ambition to become leader in plastic supporting industry
In Vietnam, the number of plastic manufacturers is very large. However, most of them specialise in manufacturing household plastic items and only a few enterprises produce plastic to support industrial production due to barriers in investment capital and technology.
Meanwhile, the supporting industry sector appeared in Vietnam over 20 years ago, after multi-national groups like Honda and Toyota opened their first plants and started looking for local vendors in order to save time and expenses.
In reality, more and more enterprises appear on the selection lists of these large groups, especially Samsung, every year, but only a few can make it into the last selection round.
In Samsung’s case, the corporation assigns experts to nominee enterprises to advise and help them to improve their manufacturing capacity and management processes. At the final round, the general director of Samsung will visit the enterprises to decide whether the enterprise can become a vendor. Numerous local enterprises were removed from the final list after they failed to live up to Samsung’s requirements.
Local enterprises have to improve massively to become vendors for large groups, but more and more are willing to try as they see massive gains if they succeed. Notably, they will have the opportunity to receive technology transfer and access to global supply chains. Besides, their brands will be more famous and they will be able to have more large customers.
In An Phat Holdings’ case, the company took advantage of being a leading plastic manufacturer in Vietnam and Southeast Asia to expand its operation. In 2018, the company purchased Hanoi Plastic JSC (HPC) and entered into a co-operation with VinFast to establish VinFast-An Phat (VAPA) Ltd. Besides, the company expanded its investment in An Trung Industries.
Via HPC, An Phat Holdings can take advantage of HPC’s customer base which includes Toyota, Honda, and Piaggio to expand operations. Besides, HPC’s advantage in manufacturing components for automobiles, scooters, and electronic will help An Phat Holdings realise its ambition to set its foot in the supporting industry.
VAPA is a joint venture with VinFast, thus, it will contribute to dealing with the consumption for An Phat Holdings’ products. Finally, An Trung Industries becoming the second-tier vendor of Samsung helped An Phat Holdings affirm its brand in the market, while simultaneously providing an opportunity for the company to continue expanding its operations.
Thus, after reviewing the operations of An Phat Holdings in the past year, it is easy to see that the general strategy of the company in the supporting industry is investing, expanding operations, and expanding its valuation via becoming a vendor for large groups.
Cuong affirmed that An Trung Industries and HPC will be the two “key cards” to help the company establish a solid foothold in the supporting industry.
PrevPreviousAnGreen agricultural film – New solutions for agriculture
NextKey things to know before expanding your factory in VietnamNext