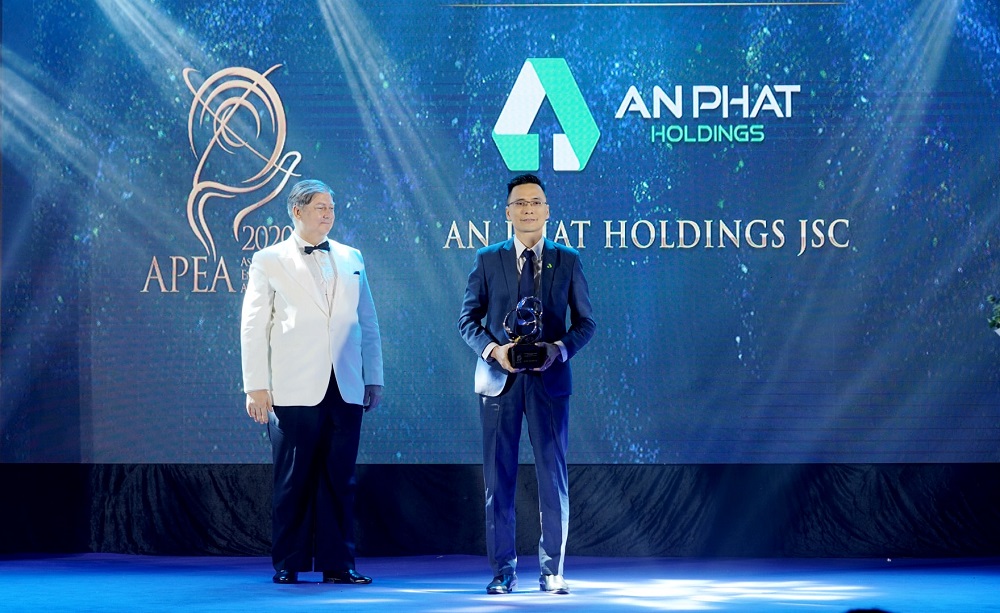 The APEA Award organized by Enterprise Asia is considered the leading prestigious award in the Asia Pacific region. APEA is held annually in major countries in the region such as Singapore, India, and China with a view to honouring the leading corporate figures and organisations.

At the awards ceremony, Pham Anh Duong – chairman of An Phat Holdings – was honoured with the Master Entrepreneur Award in the Asia – Pacific region. Significantly, An Phat Holdings became the first plastic enterprise in Vietnam to receive the Corporate Excellence Award in the Asia – Pacific for the category of enterprises in the plastic – chemical industry.

As one of the Master Entrepreneur honored at the ceremony, Mr. Pham Anh Duong expressed his honor and pride when the achievements of individual and An Phat Holdings were recognized by international community. “This recognition is not only a milestone in my career, but also a reminder that I need to maintain my passion for business and social responsibility”.

The International Advisory Council of Enterprise Asia (organizer of APEA) praised APH’s operations, production and development achievements in recent times. From a small business, APH has become the leading manufacturer and exporter of thin monolayer film in Southeast Asia. The enterprise is on the way to becoming the biggest bioplastics group in the region, owning a huge customer network in nearly 70 countries and territories around the world.

After nearly 20 years of development, APH has built a synchronous, closed ecosystem of 15 member companies operating in many fields such as: compostable materials and finished products; packaging; engineering plastics and SPC flooring; raw materials and chemicals for the plastics industry; precision engineering and molding; industrial real estate.

In particular, APH’s anticipation of green consumption compostable materials and eco-friendly products was also praised by the council.

In the coming time, APH will continue to promote its green products and materials, build the first and largest compostable material factory in Vietnam with a capacity of 20,000 tons per year, and serve domestic consumption and export needs.

Attending the ceremony with associates and partners, Mr. Dinh Xuan Cuong – vice chairman, CEO of APH said: “On behalf of An Phat Holdings, I am honored to receive Corporate Excellence Award from Enterprise Asia.This is a great honor because An Phat Holdings is the first enterprise in the plastic – chemical industry to receive this award. We will make more efforts to bring values ​​to the community, society and environment. I would like to thank all the partners and customers of An Phat Holdings in Vietnam and in nearly 70 countries around the world for accompanying us during the past time. Certainly, An Phat Holdings will achieve more and more success”.

The leading Asia Pacific Enterprise Awards is organized by Enterprise Asia. It is held annually in many countries and territories, including Hong Kong, Singapore, India, mainland China… to recognize outstanding entrepreneurs and organizations for their entrepreneurial excellence.

APEA has strict entry criteria, highly competitive evaluation parameters and a rigorous rating and voting process that honors outstanding individuals and business organizations. The organization’s activities are also an opportunity to connect Asia’s leading entrepreneurs and businesses to innovation, create opportunities for exchange, sharing and cooperation in the region.

To win this award, candidates must pass many rounds of assessment including financial audits, corporate data assessment and leadership for many years, in-person interviews at headquarters and secret voting by the association. In addition, candidates need to demonstrate business skills, experience, and a commitment to standards in sustainable business.

An Phat Holdings (APH) is one of the leading groups operating in the field of high-tech and eco-friendly plastic production in Southeast Asia.

Over the past two decades, it has become the number one thin monolayer film producer in Southeast Asia with 15 member companies throughout Vietnam and branches in the United States, Singapore, South Korea and France etc.

With many companies in the plastic ecosystem, APH has affirmed brand name, prestige and position in overseas markets like Europe, America, United Arab Emirates, Japan, Korea, Singapore, Taiwan, the Philippines…

An Phat Holdings is currently one of the largest manufacturers and exporters of thin monolayer film in Southeast Asia. APH has also partnered with many multinational companies including Honda, Toyota, Samsung, Piaggio, LG Electronics…
In the field of materials and chemicals, An Phat Holdings is one of the leading plastics resin traders in Vietnam.

Furthermore, the enterprise has affirmed its position as a reputable exporter for items such as plastic additives, high-tech interior plastics products… APH has also expanded and invested into industrial real estate.

In particular, An Phat Holdings is the first enterprise in Vietnam, and one of the few enterprises in the world to successfully produce compostable materials and products AnEco up to international standards.

APH also plans to build the first and largest green material factory in Vietnam to serve the needs of domestic and foreign production and export of raw materials and green products.
The enterprise is close to its goal of becoming a leader in high-tech and eco-friendly plastics production in Southeast Asia. Besides, the group has set a revenue target at $1 billion for 2025.