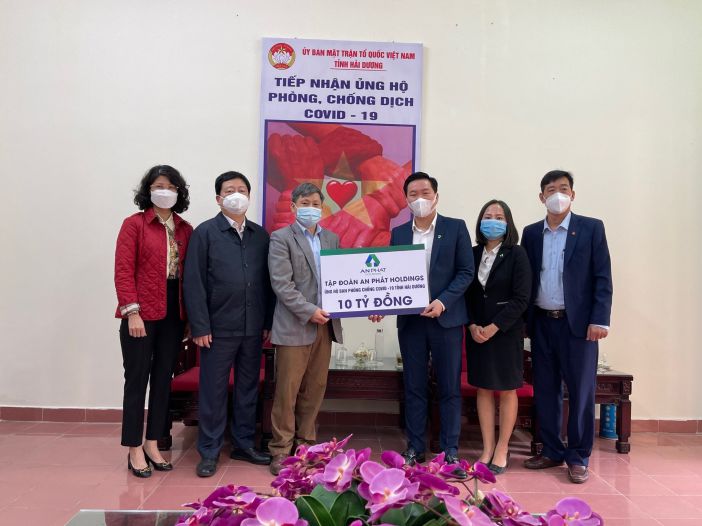 On February 17, 2021, at the headquarters of the Vietnam Fatherland Front Committee of Hai Duong province, the representative of the Board of Directors of An Phat Holdings (APH) directly handed over VND 10 billion (~$425,000) in cash to the representatives of Hai Duong province to join hands and support Covid-19 prevention efforts in the province.

Earlier, at the beginning of February 2021, when Hai Duong detected many Covid-19-SARS-CoV-2 cases, An Phat Holdings donated 100 televisions and 40 tons of essential goods worth VND 1.35 billion (~$57,000) to the Committee for Covid-19 Prevention in Hai Duong province. With 2 times of support worth VND 11.35 billion (~$482,000), An Phat Holdings hopes to make a great contribution to join hands with the government and people of Hai Duong province to fight against Covid-19.

At the headquarters of the Vietnam Fatherland Front Committee of Hai Duong province, the representative of the Board of Directors of An Phat Holdings, Mr. Pham Van Tuan – Acting Deputy CEO of the Group directly handed over VND 10 billion (~$425,000) to the representative of Hai Duong. Hai Duong Province’s Leaders received donation from An Phat Holdings and expressed appreciation to the Board of Directors and employees of the Group.

According to current situation, Hai Duong has become an epicenter of the country with 5 major outbreaks areas: Hai Duong City, Chi Linh, Cam Giang, Kinh Mon and Nam Sach. As one of the largest enterprises in Hai Duong, An Phat Holdings quickly call member companies to support Hai Duong to fight the epidemic.

On behalf of An Phat Holdings, Mr. Pham Van Tuan – Acting Deputy CEO shared: “We hope that the support from An Phat Holdings will be timely and able to help the Hai Duong government quickly respond, successfully controlled and stamp out the Covid-19. With the responsibility of an enterprise, we are willing to contribute human and material resources to help Hai Duong overcome this difficult period”.

Along with the community support, An Phat Holdings is actively coordinating with the local authorities to strictly implement prevention measures, ensuring safety for workers returning to work, maintaining production and business activities of the Group during the first quarter of 2021. Up to now, APH and 15 member companies have not appeared positive cases, An Phat Holdings is still absolutely safe.

Previously, in early 2020, An Phat Holdings also donated compostable products to 300 residents and soldiers on quarantine duty in Truc Bach area (Hanoi) and donated 5,000 medical masks and hand sanitizers to Vietnam Embassy in the United States.