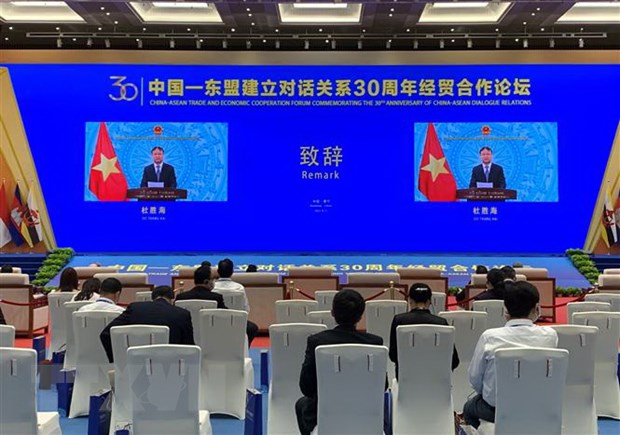 The China-ASEAN Expo (CAEXPO), an initiative of China that win support of ASEAN countries, has become an important multilateral cooperative event, contributing to promoting the ASEAN-China free trade area, a Vietnamese official said.

The China-ASEAN Expo (CAEXPO), an initiative of China that win support of ASEAN countries, has become an important multilateral cooperative event, contributing to promoting the ASEAN-China free trade area, a Vietnamese official said.

In his pre-recorded remarks delivered at a forum on ASEAN-China business and trade cooperation held on September 11 in the framework of the 18th CAEXPO, Vietnamese Deputy Minister of Industry and Trade Do Thang Hai said the cooperation between the two sides has continuously developed over the past 30 years since the establishment of their dialogue relationship, on the basis of mutual benefit, respect and understanding, thus contributing to peace, stability and prosperous development in the region and the world as a whole.

He went on to say that the ASEAN-China free trade area was launched in 2010, and thanks to joint efforts has grown into the third largest FTA in the world. Last year, despite the grave impact of the COVID-19 pandemic, bilateral trade managed to grow 32.9 percent, accounting for 15.9 percent of China’s total foreign trade. ASEAN, for the first time, has surpassed the EU to become the biggest trade partner of China.

As the gateway to the ASEAN-China FTA, Vietnam also saw its trade with China growing stably and rapidly at an average over 20 percent a year in the past five years, according to Deputy Minister Hai.

He cited customs statistics of Vietnam which showed Vietnam-China trade totaled 133.1 billion USD in 2020, up 13.82 percent from 2019 despite the pandemic. The value in the first seven months of 2020 surged 40.4 percent from the same period last year to 91.41 billion USD. China continues to be Vietnam’s largest trade partner, while Vietnam has become the top trade partner of China in the ASEAN.

The forum, held in both online and offline forms, was organised by the Trade Ministry of China and the organizer of CAEXPO to mark the 30th founding anniversary of the ASEAN-China dialogue relationship.

Source: Vietnamplus
PrevPreviousCooperating with Actis in Industrial Real Estate segment ensure An Phat Holdings’ growth in the next 2-3 years
NextImport and export between Viet Nam and CPTPP countries in July and first 7 months of 2021Next