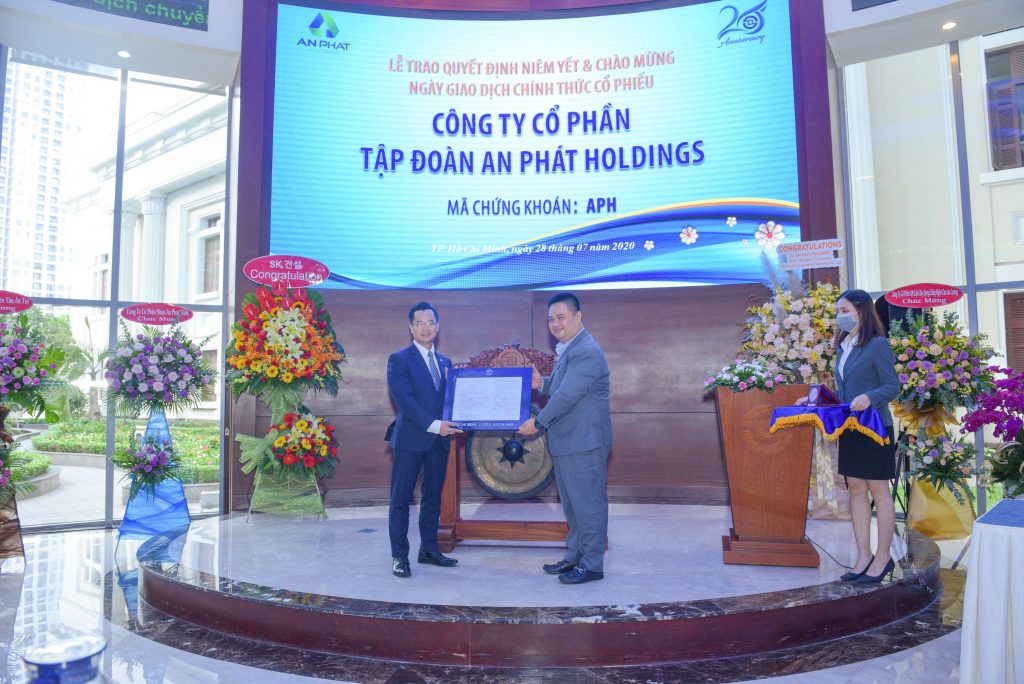 At the ceremony, representatives of Ho Chi Minh Stock Exchange awarded the decision to list and congratulate on the first trading session of APH stock.

The certain price has been reflected in the previous IPO, which successfully auctioned 4.3 million APH shares with the average bidding price of VND 50,018 per share on June 22, 2020. According to the representative of An Phat Holdings, investors placed their confidence in the potential of APH’s green products with market expansion both at home and abroad. As a result, investors paid a much higher price than the starting price at the IPO as well as after officially listing shares on HoSE.

Speaking at the ceremony, Mr. Dinh Xuan Cuong – Vice Chairman, Chief Executive Officer said: “This is an important milestone, marking the new journey of An Phat Holdings in becoming a listed company, a member of Ho Chi Minh City Stock Exchange. In 2020, An Phat Holdings aims to focus on compostable products. Therefore, having raw materials self-supply for production, the most important determinant of product cost, is a top priority. And we solved this problem by IPO to mobilise capital for the construction of the first compostable material manufacturing plant in Vietnam.”

By listing on HoSE, APH is expected to seize cooperation opportunities to lure investors, bringing potential opportunities for domestic and foreign investors as well as raising capital to build the first compostable material manufacturing plant in Vietnam called AnBio. The project will put APH in the list of one of a few companies that produce compostable materials in the world besides BASF, Novamont, NatureWorks, Total Corbion etc and completely change APH’s position to be a manufacturer and supplier of green materials. At present, APH is the only Vietnamese enterprise that holds the patent for manufacturing compostable materials.

The raw materials self-supply will help APH reduces product costs, expands the market and saves production costs about 30% for subsidiaries while the parent company still enjoys a gross profit margin of 25-30% of this project. APH targets that compostable products will contribute 40 – 50% to packaging revenue by 202. The construction of the plant is expected to start at the beginning of 2021 at Hai Phong, with an 18-month construction period, completed by 2022, with a capacity of 20.000 tons per year.

In the year of 2017, An Phat Holdings was established, marking its transition to holding model from the former company Anh Hai Duy founded in 2002.

In 2020, APH set a target for revenue and net profit up to VND 12,000 billion and VND 650 billion respectively. In the long term, APH’s growth driving force will come from compostable products thanks to its compostable material manufacturing plant.